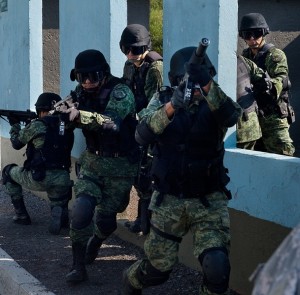 It has come to this in Mexico – a gang of gunmen firebombs a casino crowded mostly with women and elderly bingo and slot machine players. More than 50 die. President Felipe Calderon immediately blames unnamed drug traffickers. That’s a good guess, and security video may soon prove him right. But what’s the motive for such an act of terror? Was it gang rivalry…some sort of mob shakedown for protection money…a botched heist? Most urgently, was it an isolated atrocity? Or, was that the ghost of Pablo Escobar in Casino Royale’s hellish flames? Remember Pablo, the archetypal Colombian drug lord? He was once the world’s biggest outlaw, the FBI’s most wanted man, The Terror of Colombia. The Medellin cartel boss was behind the bomb plot that downed an Avianca jetliner with more than 100 passengers. He targeted the Bogota headquarters building of Colombia’s Administrative Department of Security (DAS), killing another 50-plus and injuring at least 1,000. Then there were police killings, ambushed judges, political assassinations and prominent kidnappings. Pablo certainly didn’t invent terrorism, but he adopted it enthusiastically into his arsenal of organized crime. Looking back on Colombia, where Escobar’s campaign of indiscriminate violence helped strike down extradition laws, terrorism seemed to pay off – but only for a while. Mexican drug gangs would do well to heed that caveat. In the long run, terrorism has proven to be bad business. Again, consider Pablo. Escobar’s terror tactics roused such public resentment and political heat that even fellow drug traffickers wanted him stopped. They hired assassins to kill Pablo’s friends and associates. Escobar also became an especially high-value target for international intelligence and law enforcement agencies that loaned manpower and sophisticated surveillance technology to the Bogota government. In 1989, when Pablo went to war against Colombian authorities, he was worth billions and listed as one of Forbes Magazine’s richest men. Four years later he was alone. Finally, with no money, no allies and a single bodyguard, the once-feared drug lord was gunned running barefooted across a Medellin rooftop fleeing police. Terrorism had generated too many enemies. Escobar died the victim of his own violent excesses — terror that backfired. Which ever Mexican cartel sent the firebombs should be haunted by Pablo’s ghost.