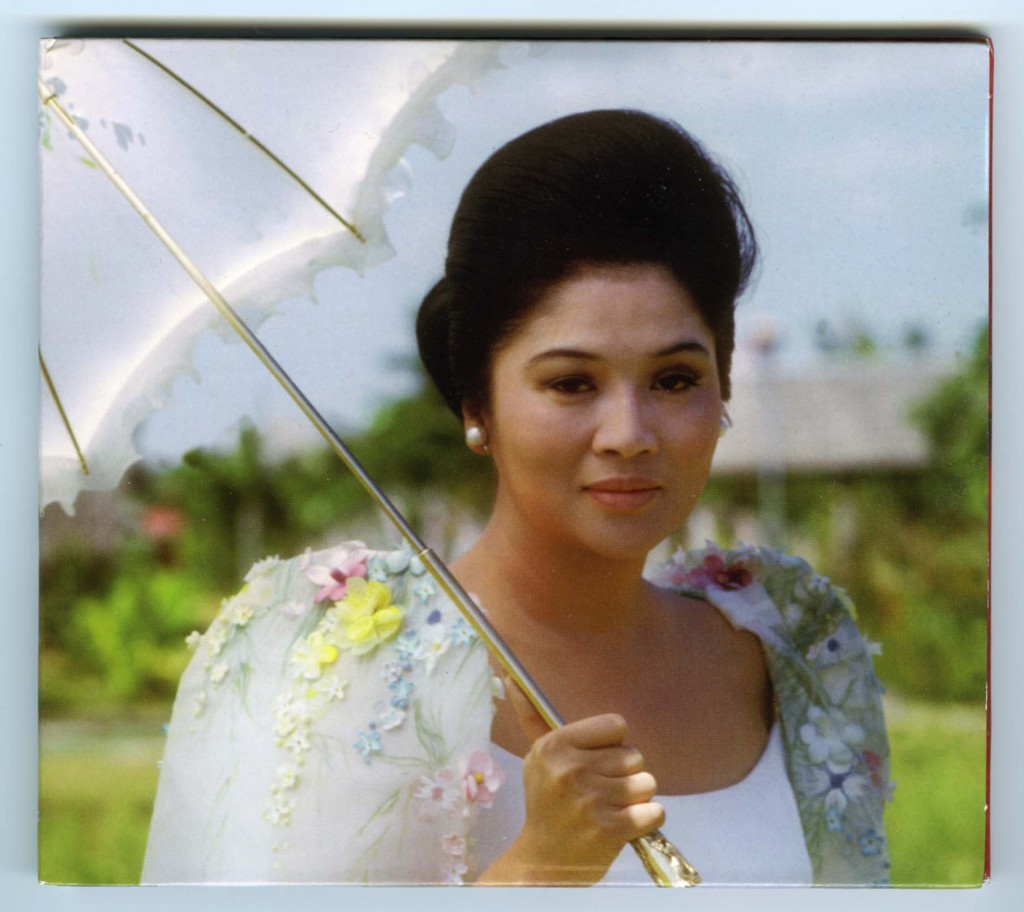 Imelda Marcos, the musical, found a home on the New York stage where Here Lies Love made two separate sold-out runs at the Public Theater.  Her story, set to a disco beat by David Byrne and Fatboy Slim, also found enthusiastic audiences in Australia and London. No surprise. The former First Lady of the Philippines remains an endless source of fascination to this reporter.

I first met Imelda in Hawaii when we briefly stood together over the glass-covered coffin of her dead husband.

She was tall and elegant in black. The body beside her was waxy and pale, but it was also surprisingly small – barely recognizable as the corrupt and bigger-than-life dictator, Ferdinand Marcos. Together, they reigned over the Philippines for nearly 20 years. They always made an odd couple.

She was the barefoot beauty from the provinces with royalty fantasies. She would become famous for her shoe collection and profligate spending on fine art including works by Van Gogh, expensive jewelry including a 37-carat diamond, and Manhattan real estate including the iconic Crown Building on Fifth Avenue.

He was the populist champion of Philippine democracy with a messianic complex. He would resort to bribery and vote fraud to retain power, use red-baiting and trumped-up charges to imprison his more popular political rivals, and would finally impose martial law – shutting down democracy for 13 years of dictatorial rule.

During the 1970s and 80s, Ferdinand and Imelda were partners in deceit and despotism. One Philippine biographer called the couple’s reign “a conjugal dictatorship.” They were both blamed for the never-solved assassination of leading Marcos critic and world-renowned human rights advocate Benigno (Ninoy) Aquino, Jr.

But that night in the hills of Honolulu, inches from her husband’s lifeless body, it was a time for more selective memories.

“My life was a beautiful fairy tale,” Imelda sniffled into her handkerchief. She had one hand resting on the glass cover shielding Ferdinand’s remains.

“I am sorry for your loss,” I said, searching for a meaningful question that fit the unusual circumstances for this meeting of newsman and news-maker.

The moment didn’t seem right to ask about a federal fraud and racketeering indictment pending against the couple in New York…or, about the $5 billion-plus they had looted from the Philippine treasury…or, about so many other alleged crimes against her own people. At that moment, the investigative reporter in me was too uncomfortable to push the matter.

“This must be a difficult time for you,” I finally added. She smiled silently through tearful eyes and the “interview” was over.

A year later, a federal jury of tough-minded New Yorkers also pulled their collective punch. Despite volumes of evidence documenting massive Marcos corruption, Imelda was acquitted on all felony counts. Jurors said they would have convicted Ferdinand had he lived to face trial.

“We couldn’t hold the wife responsible for the sins of her husband,” said one juror.

Today, even the Philippine nation is having a difficult time holding Imelda responsible for those painful “fairy tale” years of Marcos rule. There is talk of dropping efforts to recover the looted billions. Imelda has been acquitted of numerous graft charges (though some remain active). She ran for president unsuccessfully but has won election twice to congress. She currently serves as the congressional representative from Ilocos Norte, Ferdinand’s home province.

Two children of the couple also hold elected office. Eldest daughter Imee Marcos is the governor of Ilocos Norte and Ferdinand Marcos, Jr. (known as Bongbong), is a senator widely touted as a future presidential candidate.  If he runs, it sets up a historic plot twist suitable for Shakespeare or a soap opera — a second generation Marcos-Aquino power struggle.

Still on opposite sides politically are Ferdinand Jr. and President Benigno Aquino, III, a son and namesake of the assassinated Marcos rival. The president’s mother and widow of Ninoy, Cory Aquino, was swept into the presidency in 1986 by the popular uprising that ousted Ferdinand Sr. and Imelda. Now, Marcos loyalists can dream again of a return to the presidential palace — maybe as early as 2016 when Aquino must step down.

Could the son of Ferdinand and Imelda succeed the son of Cory and the martyred Ninoy? Clearly, no dream is too far-fetched for anyone who still regards the Marcos years with fairy tale whimsy.

The last time I encountered Imelda was during her long-running trial in a Manhattan federal court. She was usually in the company of Stetson-wearing Wyoming defense attorney Gerry Spence.

It was much easier to ask difficult questions in the halls of a courthouse than over a coffin. Nonetheless, she deflected most of my inquiries with smiles or nods to her legal team – or with non-answers.

“Why don’t you like me?” she responded more than once.

It is very nearly the same question that the stage version of Imelda asks during performances of Here Lies Love. In a scene contemplating the end of her reign as First Lady, puzzled by the public outcry over years of Marcos tyranny, the Imelda character insists — as did the real Imelda — that whatever she did was always for the good of her people.

The hauntingly delusional moment emerges on stage with the song: “Why Don’t You Love Me?” It captures the dictator’s wife just as I remember her. Like her stage double, the real Imelda never understood the outrage of her oppressed people, either.