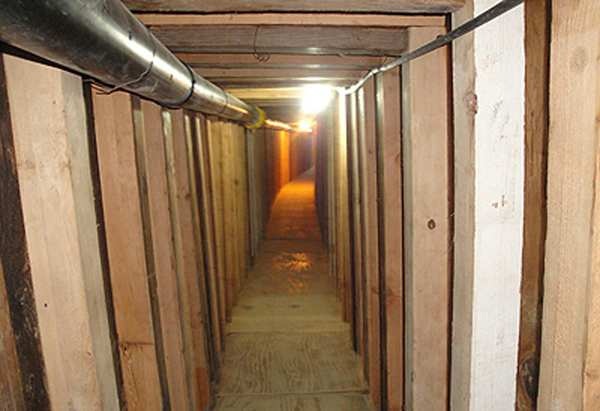 Chris Feistl, one of the DEA agents featured in “At the Devil’s Table,” invited me to Yuma this week to see an amazing example of drug cartel ingenuity – an industrial-grade smuggler’s tunnel on the Mexico border that would impress any engineer.

Feistl, now the assistant special agent in charge of the DEA’s Phoenix field office, also saw it as a chance to credit his fellow American drug agents with giving cartel bosses a healthy dose of…heartburn.

Guzman or his people put up an estimated $1.5 million to $2 million to finance a year-long effort to build this tunnel between an ice manufacturing plant on the Mexico side and a small warehouse in San Luis, Arizona. It was supposed to be a secret autobahn for hard stuff – cocaine, heroin and methamphetamine – moving from Mexico to the U.S.

Instead, traffickers hit a roadblock with what appears to be the tunnel’s inaugural shipment. Drug couriers in a Ford pickup truck were barely five miles from the border when they were stopped by state police for tail-gating. Officers found 39 pounds of meth hidden in the truck, a relatively modest load valued at about $700,000 wholesale.

But that discovery led DEA agents to the suspected stash site, the small warehouse near the San Luis border-crossing station. And, voila! Access to the tunnel was uncovered. DEA agents out of Yuma found a 3-foot by 3-foot hole in the cement slab floor concealed under a 2,000-gallon water tank. They peered down into a black hole that descended about five floors underground.

When I entered the warehouse it was stacked with blue and green 55-gallon oil drums. A DEA official reached into one of them and grabbed a handful of sandy soil. That’s how the tunnel rats avoided drawing attention to their excavations. They kept the dirt on site. Similarly, on the Mexico side, it was stored in large seed bags.

And quite a lot of dirt had to be stashed away. The tunnel spans 755 feet – more than twice the length of a football field. Much of the passageway measures 6-feet-6-inches high and about four feet wide. It is lined with plywood and supported by wooden planks four feet wide and six inches thick. A recent 4.0 earthquake in the area caused no damage to the traffickers’ handiwork.

The tunnel burrows under the border fence, a public park and a canal. It has lights, fans and a ventilation system worthy of an OSHA certificate. An air quality monitor lowered into the tunnel confirmed perfect atmospheric conditions.

I stepped into a safety harness, donned goggles and gloves and went down for a closer look. The workmanship was remarkable.

The vertical shaft on the U.S. side drops 57 feet down a roughly 3-foot-square opening lined with 4-inch-by-6-inch planks. The planks are cut to fit perfectly. The four corners of the shaft are braced with heavy-duty steel brackets.

Pre-drilled boards installed down one side of the shaft hold rebar handles that are solidly secured and serve as grips or steps. Photos of the vertical shaft on the Mexico side show something more akin to a ladder built into the wall. But both vertical shafts lead to the same well-lighted main passage – and that fact is a tribute to someone’s engineering skills.

“If they were digging blind, how did they find their way to a shaft under the right building?” one investigator pondered. “Obviously, someone knew what they were doing.”

There is more to this investigation than Feistl or his fellow DEA agents are willing to discuss. But one thing is sure, says Feistl: “We really ruined somebody’s day.”

And in the drug world that’s an ominous truth. Whoever was responsible for the failure of such an important project is probably in serious danger. On the ride back to Yuma from the tunnel location, one of the DEA agents nodded as we passed a Yuma mortuary.

“Watch for business to be picking up over there soon,” he said. “Unfortunately, that’s just the way it is.” 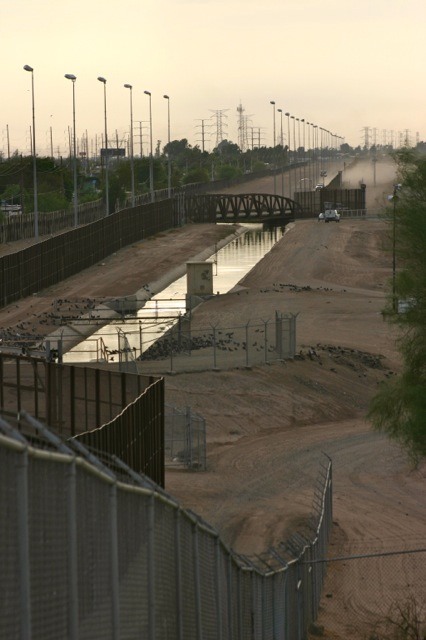 View from ground level along Mexico border, above the tunnel